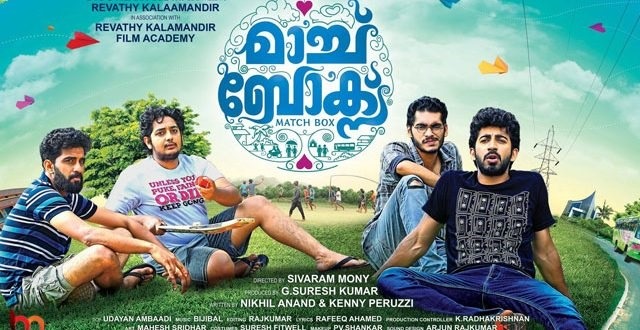 The story of the movie matchbox revolves around the theme love at first sight. Sivaram Mony and his writers are interested to focus on the fun that happens throughout this love story. The boredom can be avoid by the presence of Vishak Nair and he manages the funniest part in a good way.
The story focus on Ambu and his friends and they are typical lazy youth. The love story is between Ambu and Nidhi.Ambu is from a communist family background. Nidhi is the daughter of his fathers close friend. Nidhi got very less space in this movie she don’t even have a dialogue in this movie.
The big minus point of this movie is the male dominance. Apart from the romance they give importance to the funniest element. There are very less romantic scenes and emotional scenes.
Roshan Mathew is as Ambu and his performances in the movie Anandam and Puthiya Niyamam are quite better. But in this movie, especially in emotionally sensitive areas ,his performance and dialogue delivery looks artificial. The comedy part is safe in hands of Vishak Nair. He scores high in this movie by the cool handling of comedy. Drishya Raghunath’s working was also an average one. Shammy Thilakan performed well. The other cast include Ashokan, Rony David, Sarath, Nirmal and Joy Mathew.
The movie is typical an average movie. There is not so awesome. Same pattern is used in this movie, and no significant development is there. Many irrelevant parts made the film too long and the climax have no impact on the emotional state of the film. The music is good and all the other elements are average.